Students from the Faculty of Medicine are inviting all students to come to Kings College Circle this Friday, November 30th at 3pm, to participate in creating a large, human red ribbon in recognition of Worlds AIDS Day.  Come out and help support this important cause!

But what is HIV/AIDS?

HIV stands for Human Immunodeficiency Virus.  HIV attacks and weakens our immune system, which is the body’s defence against diseases and infections.  AIDS stands for Acquired Immune Deficiency Syndrome.  A person with HIV is considered to have developed AIDS when the immune system is so weak that it is no longer able to cope with diseases that it would normally be able to cope with.  HIV is a virus that can be transmitted through blood, semen, vaginal fluids, rectal secretions and breast milk.  However, the most common ways HIV is passed on are through sex without a condom and sharing infected needles or syringes.

Unfortunately, there is no cure for HIV.  Nevertheless, it is preventable.

Also, if a person does contract HIV, treatment can help keep the virus under control.  The key is early diagnosis.

Great, but why does this matter to us?

Anyone that has sex without a condom or shares needles is at risk of HIV.  As of 2008, youth aged 15-29 accounted for about 21%-23% of annual positive HIV reports.[1]  This is largely attributed to risky sexual behaviours and knowledge gaps in youth.[2] 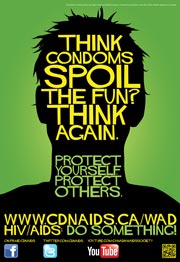 Raising awareness about HIV/AIDS – contraction, transmission, and treatment – is one way we can get involved to help decrease the transmission of this disease.  For more information check out “Getting to Zero”, the UNAIDS 2011-2015 strategy for the global HIV response.

And help out with condom distribution to under-served populations throughout the world.  It’s as easy as clicking the “share to Twitter” button on the Youtube video above: http://www.1share1condom.com/.

Never doubt that a small group of thoughtful committed citizens can change the world. Indeed, it is the only thing that ever has.