A Letter to Fellow Travellers

Imagine for me, lifeatuoft, the following 3 things:

(1) a friend who will love anyone exactly as they are,
(2) a professor who knows that the hard problems of science have deep existential relevance, and
(3) a joyous and unrelenting community of protesters

Now, hold onto these thoughts. We’ll come back to them.

I’ve spent a huge part of my life with my eyes cast a bit too deeply into the horizon, or maybe the sky, but certainly nothing myopic in the least. I have always felt like I was just a few years behind where I belonged. Why am I still living in Canada, speaking English? I would wonder. I eagerly anticipated grad school. Or I thought it would be cool to, say, move to Nepal or make documentary films or learn to fly in lightweight contraptions above the earth. I became convinced that there was some place and time that wasn’t this one but that did exist in which suddenly I would be in perfect harmony with the universe. In that classic “marshmallow experiment” psychology task, I definitely was the kid who would wait days for an extra marshmallow. My parents raised me with a rigorous sense of duty, discipline, and delayed gratification. In many ways, this has enabled me to ambitiously chase the things I’ve wanted. It also, however, leaves a residual sense of longing.

So, I went searching. Searching for that future place-and-time-puzzle for which I was the missing piece. Distant lands, a course about Sacred Space, infinite books – all rewarding but none completely satisfying.

And now I know what it is that I was missing: “impermanence; acceptance of”

This was because I was thinking only in terms of the physical (space and time) rather than that which moves through it (humanity). Maps are pretty static on the time-scale of a university education, and I can always point to the future with the word “tomorrow” and some kind of certainty. Human relationships, in contrast, are much more fluid. I see my best friend about once every 2 years. I have not visited my grandmother in a while, even though she is incredible (and her pies are second to none). The family I had in Sweden is just a set of memories and Christmas cards now. Things change, and change is weird. This makes it hard sometimes to decide what kind of friendships and conversations you really want, and probably need.

This semester has been qualitatively different from all before it, then. By virtue of teaching me something special about human character.

It started in October. Raw curiousity compelled me to check out the Occupy camp, where the rows of tents and handwritten manifestos and groups of avid conversationalists is best summarized in a Kurt Vonnegut quote displayed on one of their signs: 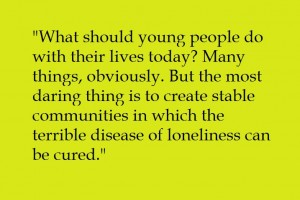 At around the same time, I made an unlikely friend that taught me in a very real way that human relationships need not be defined – no, they can undulate, collapse, and expand, and none of these things is cause for mourning. He showed me what it meant to stand up tall, be stubborn and proud, smile, and give people my heart without expecting anyone’s in return. He didn’t tell me – but I later discovered – that loving the people around you (friends, classmates, strangers) is a boomerang, and soon enough all of those parts of yourself that you gave away will end up right back in your two good hands. What do I give power to? Not fear, not jealousy, not prejudice. The potential of others to completely change my world, perhaps – and there’s lots of it.

A few weeks ago, I was stopped by a professor after class. I was surprised at it, really, because during this course’s particular lectures I tend to hang back, write furiously, get lost in my thoughts, and almost never raise my hand. It makes me less than the ideal student. Besides, I find this particular instructor more intimidating than most – there is just something about absurdly brilliant people that makes me want to just go mute and soak in their thoughts. Nevertheless, he invited me to his office the following week, and what followed was one of the most fascinating, honest, consciousness-expanding conversations of my life. I did not feel that I deserved such a conversation. I had neither earned nor prepared for it.  He understood why I “wasn’t ready to talk” – language is too imprecise! Complete communication is impossible! – but he pointed out to me that language is an instrument that can be played with unrelenting passion, subtlety, and courage. Over the course of 90 minutes we talked about God, multiple infinities, poetry, neuroscience, and what it means for a life to be well-lived. He reassured me that on a path of a deliberate and deeply-lived life, fellow travellers are rare but make the journey inexplicably worthwhile. It made me stop worrying so much about my destination.

You see, in the course of this conversation, the lessons of my friend, and the messages of the Occupy protesters, I’ve come across an essential idea: namely, that wherever and whenever you want, you’re exactly to who you want to be. A large part of this is how you decide to relate to others – choosing to ask how someone is doing; to engage intellectually about the intensely personal issues of meaning; to find community in novel places. As I finish up my exams and prepare to head home for the holidays, I hope to carry these lessons with me. I can’t wait to tell my family – in a more honest way than I’m used to – exactly how much I love and appreciate exactly who they are.

2 comments on “A Letter to Fellow Travellers”