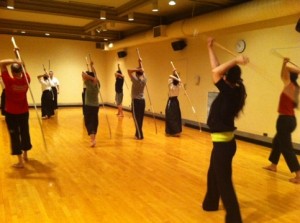 Aikido, Jiu-jitsu, Karate, Taekwando… I’m sure you’ve heard of these forms of East Asian martial arts, but have you heard of Naginata?

Naginata is a form of martial arts that uses a pole with a blade. I chanced upon the U of T club when I was on Ulife and it looked so cool that I had to email the club to ask if I could join a practice and interview them.

Last week, after my class ended at 9 p.m., I headed over to Hart House to meet Jo-Anne, a 4th year life sciences student and president of the Naginata club, for the club’s 10 p.m. practice. I was surprised at how late it was, but later, Jo-Ann told me that it was because most members had classes that ended at 9, and 10 was a good time where they aren’t rushed from class and have a chance to eat before practice.

I was in shirt and jeans, and kind of mortified to wind up in a sea of people wearing workout clothes and uniforms. If I ever do anything athletic at Hart House again, I’m going to for sure bring a t-shirt and sweats (and not, you know, forget them at home).

Matt, a 4th-year East Asian specialist, runs the practices. In a clear, ringing baritone, he gives orders in Japanese for the members to follow. We started out with a brief warm-up (so glad I didn’t have to do a push up – my upper body strength is pathetic), some stretches, and then the members kneeled, bowed, and greeted the instructors as a group in Japanese.

After, we each picked up a naginata. It was a very reverent process. You kneel on one leg, and pick up the pole with both hands. It’s lighter than I thought it would be, but as unwieldy as you can expect from a pole that is taller than you.

The members then lined up in three rows, and we began practicing with the naginata. Some of the members were going to participate in a grading later that week, so fortunately for me, the class was a review of all the basics and I got a taste of a little of everything.

An hour’s practice isn’t long, but I got to work on my grip, try out footwork and basic attacks. Every time you strike, you let out a loud exhalation of breathe (ie., “HAH!”), and although I was too shy to say it at first, I was barking it as loud as anybody else by the end and found it exhilarating.

Even though it was a group practice, Matt goes around and provides individual attention to each member, which I really appreciated. As an absolute newbie, it’s important that my stance or grip is corrected, because it’s the foundation of any sport.

At the end of practice, we kneeled again, bowed to thank the instructor, and we put our naginata away.

I got a chance to talk with both Matt and Jo-Anne afterwards. Matt is a 1st dan and Jo-Anne is at the 2kyu level. You know how in karate you have belt colours? In Naginata, there are Kyu and Dan levels. Kyu goes from 6th all the way to 1st, and then after you get your 1st kyu rank, you grade for dan level, which goes from 1st dan all the way to 5th.

There are about 26 regular members registered and over 60 registered, and the members participate in competitions! Last October, the club (along with the Naginata club at the Japanese Canadian Cultural Centre), sent 10 people to Montreal for the Canadian National Championships, and every March, the club sends a delegation to New York for their annual tournament.

Matt and Marija, the original founder of the club, will be in Japan for the Naginata World Championship that is held every four years, and Jo-Anne will be participating in the Friendship tournament after. All the very best of luck to them!

For those interested, the club is holding a summer training camp. You might just catch a glimpse of them practicing outside on campus!

0 comments on “Naginata what?”