How was your Reading Week, dear readers? Just as short as mine? I don’t understand why I can never get caught up on my readings, even when there’s a week (at least in name) specifically dedicated to it.

So a few weeks ago, Georgie, Josh and I went over to visit the IT department at the Physics tower. I got a tour (oh-em-gee, the server room is amazing), and I was supposed to write something about it. But I got very distracted*, and well, I couldn’t read my own notes, as embarrassing as that is.

So I went back to get a second interview for you. This time, with specific questions in mind.

You know how if you want to access wireless on your laptop, you basically need to jump through hoops? I wanted to know why that was. I couldn’t find instructions online, so on top of speaking with Terry Jones from I+TS, I also took step-by-step screen caps of the process for you.

Basically, these hoops are essentially barriers to help keep the “nasties” out. Nasties is the name that Terry gives to anything you don’t want on your computer. Every time Windows has a new major security patch, the wireless network makes sure you’ve downloaded it before allowing you on. Windows just released a patch a few weeks ago, and this was probably the screen that greeted you when you tried to log onto the internet: So what are you supposed to do? Well, scroll down a little and you’ll see the instruction to run the scan tool. 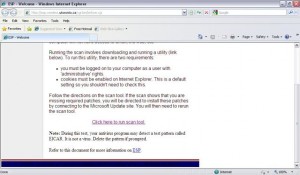 You’re going to have to save this program onto your computer, so go ahead a click “save.” 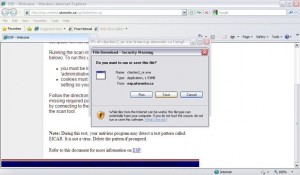 Run the tool. You’ll only see the centre window, not the surrounding stuff (which is my graphics editing software, GIMP). 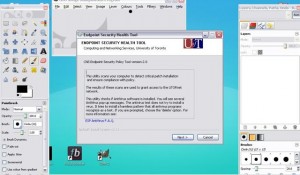 And now your computer is being checked to make sure everything’s a-okay. 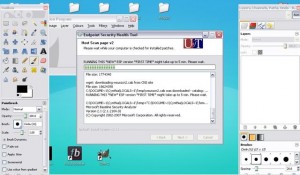 Here’s a crucial step, one that I messed up the first time. The scanner deposits a file masquerading as a virus into your computer. This file is not a virus, but checks the capabilities of your anti-virus software. 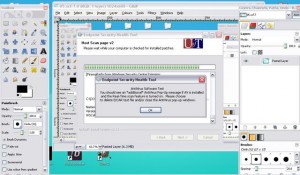 When your anti-virus software picks it up, you have to delete it. I just quarantined it the first time, and the scanner thought my software failed. I had to restart the entire process again. 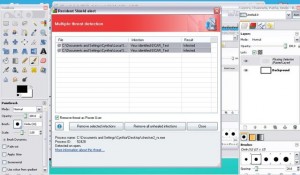 After that, thing’s should be a breeze. You’ll be able to log onto the wireless in no time. 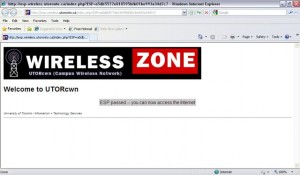 See, this entire process is U of T’s way to make sure your computer is safe before letting you connect to the network. As you probably know, U of T is quite populous. Can you imagine if one infected computer made its way onto the network? Zombie outbreak wouldn’t even cover it.

So how do you prevent nasties from getting into your computer in the first place? Terry gave me five tips:

1) Make sure your operating system (Windows, Mac, Linux, etc) is up-to-date. Don’t just click “cancel” every time you see that yellow shield thing. You know what I’m talking about. A professor of mine did it the entire semester. I assume he only uses that particular laptop for class, because he boots it, Windows tries to restart and he spends a few minutes each class clicking the “restart later” button.

2) Install updates for Office, Adobe Flash, Acrobat, Java, etc. Same concept as 1), but just make sure your applications/software are updated. Especially the Adobe products because they’ve been hit hard lately by hackers.

3) Work as a limited user, not as the admin. Having restricted access means that you can’t install anything, which means that viruses can’t install themselves without you knowing. As Terry says, “You won’t be caught with your pants down.” I thought it would be a hassle, but I switched it nonetheless and I was surprised to find how little I actually need admin privileges. My computer’s not new, so I’m not trying to install stuff left and right.

4) Get anti-virus. This is a no-brainer and almost too obvious. There are tons of really great free anti-virus software out there, but since you’re a U of T student, you might as well take advantage of the free Symantec we get.

5) Get a firewall. Most computers already have this. A firewall prevents things from going in; it’s like a one-way mirror where things inside can see out and things outside can’t see in. Now, here’s the thing. If there’s a virus already inside your computer, it can still send messages out to zee h4ck3rs, which is why being a user with limited privileges is important; at least the virus won’t install.

Hope this helps. I know it did me.

*I was later told that this is a common affliction called AD-OS: Attention deficit dis- Ohh, shiny!