WorldPride kicked off last Friday and it reminded me of my first trip to Toronto.  My partner and I were checking out the college campus and decided to take the subway into downtown Toronto.  Down in the subway station we could hear the celebration and feel the beat vibrate through the subway station’s concrete walls.  We had no prior knowledge what was happening in Toronto.  I remember going up the escalator and seeing the sky shining down through a rainbow filter.  My first impression of Toronto was that it was alive, full of positive energy and acceptance.  My adult life has been spent in the United States before moving here. I’ve lived in some progressive places like Seattle and San Francisco, but never had I seen such an outpouring of love sanctioned by a city and its residents.  Later that evening, we made our decision to move our family to the GTA. 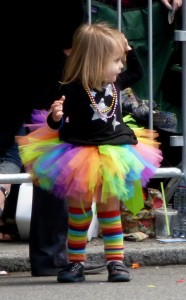 Unfortunately, the LGBT pride does not always translate to all cultures or areas.  There are many factors such as belief systems that are perpetuated across generations without analyzing the evidence on perceived prejudices.  My second child was diagnosed with Asperger’s Syndrome (High Functioning Autism) at the age of four.  My research into the Syndrome has shown that a higher percentage of autistic people become homosexual[i] because they love who they want and disregard social stigmas.  Autistic people view life logically and love the person that they see, regardless of their biological designation. Their love is pure and not clouded by what other people think of their relationship.

From birth my older children always had LGBT people in our social circle so it has always been a non-issue.  We had neighbouring kids with “two moms” and the difference was never raised.

One day, while walking with my oldest to the store, I was asked if it was okay for two boys to kiss.

“You shouldn’t kiss anyone who doesn’t want to be kissed. And I think you’re too young to be thinking about kissing, you’ve got plenty of time for that.”

“I’m not thinking of kissing, I just want to know if it’s ok for two guys to kiss.

“It doesn’t matter what two people are kissing, if that’s their choice.”

“Does it matter who I want to kiss when I get older?”

“It doesn’t matter who you want to kiss when you get older, as long as the person you’re kissing loves and respects you.”

I stopped, gave my kid a hug and kissed that little face. I just want my children to be happy, and their future love of their life to have the same goal. I don’t care who my children loves as long as I see mutual respect and a pure love.  Thank you WorldPride for fighting for everyone’s right to love who they want. You’re benefiting families everywhere, whether they acknowledge it or not.