*When Jane heard we were doing a story about “baby blues”, she decided to share her story with our readers. Jane’s name was changed in order to protect her privacy.

I delivered my babies at 37 weeks and 5 days, after 37½ hours of labour. We went straight to the hospital when my water broke at midnight. I only delivered two days later, mid-afternoon via an emergency C-section, after three epidurals (the first came out, while the second only froze my legs) and being drugged by the anesthesiologist because I was getting panicky after being told that ultimately I would need an emergency C-section. I had not eaten in three days and had only slept about five hours during that time when I was rushed to the Operating Room. I think it was a normal reaction to be panicky, but the doctor didn’t seem to agree, hence the anesthesiologist’s decision to administer a sedative. Because of that, I have no recollection of the birth of my babies; there is a video of me, and I am completely stoned. Nor do I have any memory of breastfeeding them for the first time. 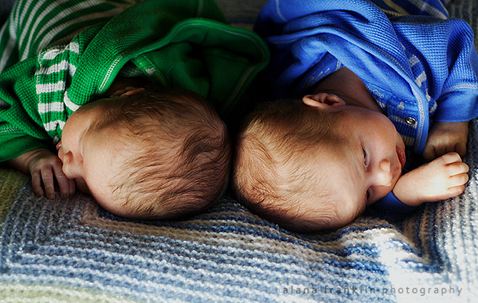 Grady and Ethan By Alana Franklin

Honestly, I was just happy the delivery was over. By then, the hospital was full, so the nurses had no time for me and I was pretty much left alone with breastfeeding, which was incredibly hard and painful—I had no clue what to do. After two days, I was discharged and sent home with those two little strangers (and I need to admit that one of my boys wasn’t very cute: he was super-duper skinny and looked like an old man). Once home, I had no clue what I was doing. I was in a lot of pain, I couldn’t figure out how to nurse my starving boys and one of them refused to sleep at all at night, so we were often up until 3 or 4 am. When they were eight days old, I got really sick and ended up back in the ER with a massive life-threatening infection and had to stay in hospital for three days. I returned home needing an IV drip for a week and was left with an open wound for two months! Tragedy struck our family twice: ten days after the babies were born, a very close family friend passed away, and my husband’s cousin died in a car accident. We were devastated.

So with all of that to deal with, I did not care much for my babies in the first weeks. My husband and I took good care of them: we fed them, we bathed them, we changed their diapers. But we did it because we had to, not because we wanted to. When I got sick, my husband came with me to the hospital and admitted to me that honestly, he just wanted to be with me, rather than being with the babies, and that he only cared about me getting better while my in-laws took care of them. For the first few weeks after I returned home, we just stuck to a routine of diaper changes, feeds and burping. I pumped and bottle-fed and somehow, we survived. Frankly, however, I don’t remember much. Around the five-week mark, I was able to start breastfeeding my boys, which made life so much easier—no more bottles to wash and no more pumping. At six weeks, the boys started to sleep from 8 pm to around 1 or 2 am, giving us a degree of our lives back and a chance to sleep. They were growing and we were starting to figure out what to do with them. Most days, I was able to take them outside. They started smiling and we gradually fell in love with them. It was a slow process that took months, and I would say that by maybe by the time they were five or six months old, my husband and I were crazy about them.

It was such a hard time for all of us. My only regret from all this was that I did not hold my boys more when they were tiny, and because of that I didn’t bond with them. We did everything we had to do, and then we just put them in their bouncy chairs and did our own things. We never spent time just holding them and I think if we had spent more time just cuddling them, the bonding would have been established and things would have been easier. If you are in this position please remember it does get better, and nothing is more important than just being together.

Jane is the mother to two healthy and happy boys, who are now two years old. She is now back at work and successfully juggling her career and family.