I just stumbled upon this entry on the excellent New York Times’ parenting blog. It talks about dads who are involved with their kids and who also work. Why aren’t they called working dads?

That post got me thinking. My partner, Rick, works about 10 hours a day and as soon as he opens the front door at around 6:30 pm he gets immediately sucked into the “bedtime whirlwind”. I give him a quick kiss while handing him Oliver. It’s bath time and Nina is already in the tub. Rick uses one hand to tell a duck and frog story while discreetly washing Nina’s hair with the other hand (she is not a fan of getting her head wet). As we get the kids out of the bath, I nurse Oliver while Rick gets Nina dressed in her PJs and begins the (very long) story time ordeal. He has got to be the best storyteller out there, using voices, gestures and just the perfect pacing to bring a story to life. 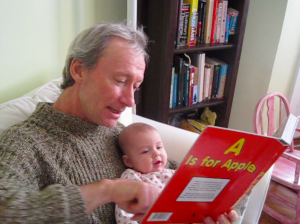 No wonder Nina protests when I, with a whistle, call him over to swap kids. Rick then reads Ollie a book, arranges his stuffed animals just so, and holds the little guy’s hand until he falls asleep. In the process Rick invariably falls asleep himself. An hour or two later he wakes up, red-eyed and confused, and tries to get some dinner into him before putting the garbage out or hanging the laundry.

Not long after that, he collapses back in bed for a night of interrupted sleep — he sleeps with Ollie while I sleep with Nina in the other room (we are trying to night-wean and Ollie is possibly the worst sleeper in the world). Rick is lucky, very lucky when he gets a 3 hour stretch of uninterrupted sleep. At 5 am or so, he comes to get me to feed Ollie, and crawls back into bed with Nina (talk about musical beds!).

Most days the two of them wake up around 7 am and, while getting ready for work, he tries to keep Nina happy enough that she won’t wake up Ollie and me. The little dude usually wakes up about half an hour after his big sis. By then, we only have time to give Rick a quick goodbye kiss and off he goes to work again.

A working dad? I think so.